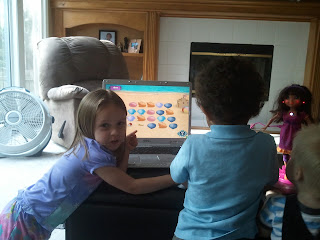 Last weekend was Kristen's weekend to work so I got the kids most of the day Saturday.  Due to some other events I wasn't able to watch them Sunday afternoon while Kristen was at work.  However, Saturday was pretty fun.  We got up and hung around the house.  I made pancakes (with butterscotch chips!) for the kids and hashbrowns and eggs for myself.

Chloe had asked me several times over the last few weeks to play her Dora game so I got that set up.  She loved it and is getting to the point where she could play by herself.  She even was trying to teach Miracle how to play. 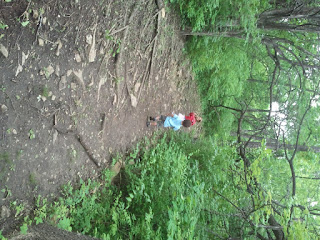 After breakfast and the game and after Brady's nap we headed off to find something to do outdoors.  It was a toss up between the Mahaffie Stagecoach and Ernie Miller nature trails.  We decided to avoid large crowds and head to the nature trails.  We ended up taking the longest trail (by accident).  I took the stroller with Brady and Miracle riding so I could take drinks and food.  However, I found out that it wasn't the best idea.  Tons of tree roots, several stream crossings and mud told me that i should have used the backpack instead.  However, we were able to travel a couple miles and burn up over an hour out there.

The last picture you see is not child abuse.  Brady really wanted to wear a hat and that was the first one i could find!  He enjoyed it for all of 30 seconds. 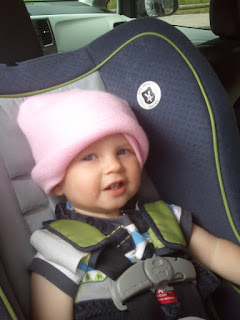